The ruined orgasm I gave John on Saturday evening has to be the best (or worst, depending END_OF_DOCUMENT_TOKEN_TO_BE_REPLACED

Forced male chastity... a bit of a hot topic, and, ultimately, one large pile of unicorn shit, END_OF_DOCUMENT_TOKEN_TO_BE_REPLACED

Permanent chastity... that alluring and exciting ideal is one we've decided to embrace and pursue.

So we’re now definitely going for full belt permanent chastity rather than device chastity. I alluded to this, albeit cryptically and enigmatically in a reply to a comment by Tom Allen yesterday.

In short, we’ve discovered there’s simply no way John can wear the Lori #12 D for any length of time because it causes some serious oedema. Not painful, and not dangerous unless left for a while but it definitely rules out being able to use it for proper permanent chastity and orgasm denial.

We’re both very disappointed, and John probably more than I am since he is desperate to give up that last little bit of control.

Permanent Chastity… if You Dare! 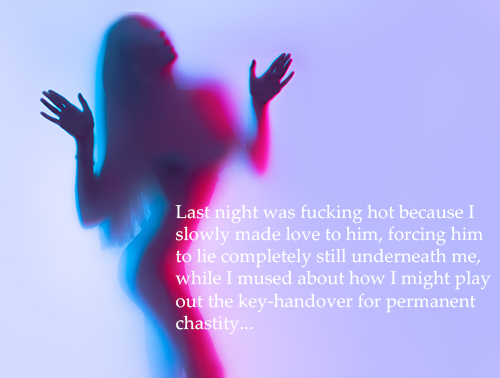 On the downside there’s the fact it was a expensive and John went to all the trouble of getting a PA for it (which is a funny story in itself). I do want to stress this is in no way a reflection of the device in terms of quality, craftsmanship or Lori’s service. It fits perfectly and is exactly what we wanted and expected.

It just seems that John’s body doesn’t take kindly to being in it. Not only did his shaft swell up all along the top, but the head blew up, too.

So, he’s now taken the PA out and we’re done with the Lori for good (it’s now for sale if anyone’s interested).

But on the upside… we’re now going for full belt permanent chastity and have already sent the measurements off and should have the belt in a couple of weeks.

Having corresponded with a few women who keep their men in belt permanent chastity rather than just devices it looks like things could get very interesting.

Apparently the psychological impact on a man of not being able to see or touch his own penis is incredibly powerful.

I’m not convinced permanent chastity is actually going to affect John too much since he’s not submissive and I easily can’t imagine him getting that way.

I think he’ll just be glad to be locked properly in permanent chastity. And that, in my opinion, is going to have a much more powerful effect on him.

Because at the moment even though we dance around the idea of permanent chastity like moths drawn to a candle flame, there’s no way I could enforce permanent chastity, simply because he’s on his honour as often as he’s not.

But with the belt, once he’s got it fitting properly and hands me the keys… well that’s going to be a whole different thing for him. They say money changes people, as does power and authority.

I wonder if it’ll change me knowing full belt permanent chastity means he’s completely at my mercy unless he goes to the extent of cutting the belt off or genuinely changing his mind?

I honestly don’t know if permanent chastity will change me.

Last night was fucking hot because I slowly made love to him, forcing him to lie completely still underneath me, while I mused about how I might play out the key-handover for permanent chastity.

Would I let him have one last orgasm before the first long stretch of permanent chastity in the belt… or would I just take the keys, knowing his aching balls have already got a head start on his upcoming denial?

And how long will I make him wait that first time?

He’s done months before now, but largely on the honour system, so it’s not the same as the full belt permanent chastity he’s got coming.

It’ll be months for sure. Two, perhaps three.

See, this is what I can’t get my head around because once I start thinking about really long term, I can’t think about it rationally because it’s so hot.

Last night I wanted to lock him up tight, make his full belt permanent chastity something he really wished he’d never asked for. I wanted to know he’d always be that hot, every moment of every day.

Sometimes it just doesn’t make sense even to think of letting him come, especially when I know he’d beg me for permanent chastity and orgasm denial in an instant if I told him to.

That’s part of the power thrill. I see it in his eyes as I fuck him. I see him pleading with his eyes for me to make him beg me to sign that last little bit of our contract and make permanent chastity real… and I have to fight myself not to make him do it.

Because I swear if I do, it’s for real.

Makes me shake just to think about permanent chastity, and it’s why I’m probably rambling somewhat as I write this. Perhaps there’s a hard-hearted loving bitch in all of us… and you men love us for it.

Back to top of Permanent chastity, our tantalizing new commitment for the future