The ruined orgasm I gave John on Saturday evening has to be the best (or worst, depending END_OF_DOCUMENT_TOKEN_TO_BE_REPLACED

Forced male chastity... a bit of a hot topic, and, ultimately, one large pile of unicorn shit, END_OF_DOCUMENT_TOKEN_TO_BE_REPLACED

Male tease — the vanilla kind, if there be such a thing — is  not that different from male chastity, per se.

I’m writing this post in response to a comment made by Grey yesterday in which he said John was brave to come out about his desire for male chastity, and then my willingness to explore it.

And I suppose this is true, but you have to see it in the context of our marriage.

We’re open about things anyway so it’s not as if he feared I’d run screaming from the room. Yes, I might conceivably have just said, “No way!” but we are both of the mind where we don’t measure people’s worth by their kinks or lack of them.

More to the point, I think far too many people are not assertive enough, both in and out of marriage (I strongly recommend Anne Dickson's A Woman in Your Own Right. It's applicable equally to men and women).

So from that perspective, he knew it was “safe” to come out and say he wanted to explore male tease and denial.

How safe he’ll be in the belt when it comes remains to be seen… but that’s another matter (and I’ll get to answering the comments on that tomorrow).

Anyway, there’s something else here, too, and it’s actually something John brought up as an idea and I’ve kicked around a little. I think I agree with him.

Essentially, he said male chastity is a lot more common than you might think – the only issue is most people don’t know what they don’t know. 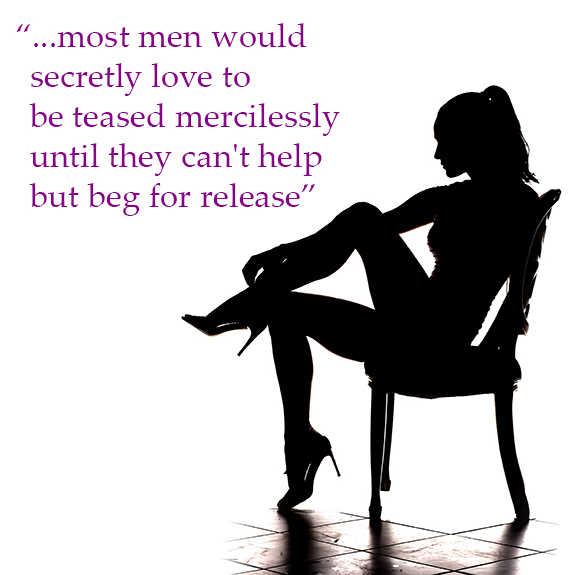 Almost every woman reading this will have at some time teased her man at some point during lovemaking.

If you’ve been with someone for more than a few nights it’s almost inevitable.

I'd go further and say most men wold secretly love to be teased mercilessly until they can't help but beg for release.

OK, so this is a biased audience but I bet if you could get practically every woman on the street to talk about this she’d admit it...

The male tease is a fantastic power rush...

That look in his eye as you hold him on the brink, maybe talk dirty into his ear, maybe even if you’re feeling daring tell him you’re going to fuck his best friend in front of him… it drives them wild (and I also know if you pick the wrong man to do this last with, it drives them wild not in the right way, so be sure of your man).

Now, what’s the difference between teasing and male chastity?

There’s none of substance.

What we’re describing with the male tease is a mild form of chastity play, isn’t it? And for all we know, we women are responsible for planting the seeds early on when we do this (now wouldn’t that be ironic?).

I think this all explains why male chastity is so common. When John came out to me I hadn’t heard of it before, but it seemed to make sense and when we started researching it (or, rather, when John showed me the research he’d been doing for a long time!), I was amazed at just how common male chastity is and how much information there is out there (I think a lot of it is misleading bordering on potentially harmful, and that’s one reason for this blog, as you know).

Here’s another observation of mine, too, not only from reading online forums and the like, but also thinking back to past boyfriends who have been more into the teasing as well as friends and contacts I’ve spoken to (I have the seeds of another post in my head now: “how to bring up male chastity in a polite conversation without killing it stone dead”).

It’s that in general, men who like the male tease and then, later, the idea of male chastity, and are comfortable with it in the context of their own masculinity tend to be more intelligent, imaginative, self-assured and possessed of a high self-esteem.

I think it’s interesting how the illiterate keyboard jockeys, those truly sad wankers, are clearly living desperate and closeted lives and feel the need to express their aching on anonymous Internet forums (yes, you know who you are).

So, just my two penn’th on this.

Personally I think barring extreme prudes and certain religious whackjobs virtually any man who’s not actually a Neanderthal would love the male tease and least try, and most likely enjoy, male chastity, if you put it to them in the right way.

I suppose Doms wouldn’t, either, but that’s not because of prudery or religious whackjobbery, I’m sure.

My point is they wouldn’t be revolted by it per se; rather it’d be just not their cup of tea.

More to the point, though, I think most women would, too, if only they’d give it a try.

Back to Male Orgasm Denial
Previous
Next