The ruined orgasm I gave John on Saturday evening has to be the best (or worst, depending END_OF_DOCUMENT_TOKEN_TO_BE_REPLACED

Forced male chastity... a bit of a hot topic, and, ultimately, one large pile of unicorn shit, END_OF_DOCUMENT_TOKEN_TO_BE_REPLACED

Male chastity, punishment or pleasure? Interesting how the ebb and flow of ideas and comments steer one’s thoughts. 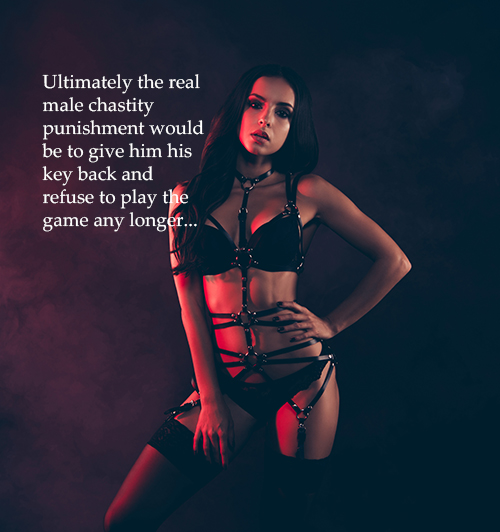 A case in point: is male chastity punishment or pleasure? Indeed, are these two mutually exclusive, or can it be both punishment and pleasure?

And does it have to be both at the same time or is it sometimes one and then the other?

I admit, these were the kinds of thoughts I found rushing through my head when John first “came out” to me about his thoughts, feelings and desires around male chastity, although they were perhaps not so clearly expressed even to myself.

I think they were largely overshadowed by a general heading of “WTF?” with the subheading “Why ME?”

And this is a very common reaction from women everywhere so far as I can tell. After all, although I’ve spoken to women who are themselves kept chaste by their Doms, it seems to be a completely different experience – from what I can gather and understand, that’s more of the mental side of things whereas with men it’s both mental and more profoundly physical.

So the next question I asked was… why?!

Is his desire for male chastity punishment for something, and if so what? …

And why the hell does he want it?

Understand, these questions went through my mind quickly and came as a huge rush of emotion and, frankly, bewilderment. I’m just doing my best to articulate the inarticulable.

But the question remained, what possible pleasure can a man get out of having his orgasms withheld?

I know as a woman, that would probably drive me to do murder (or at least serious physical injury), and very quickly.

It turns out, according to John and one or two other men I’ve corresponded with about this, in purely physical terms it’s like having sex permanently and denial, while profoundly frustrating at the time (when John’s begging to come… he means it, that’s for sure), is also deeply satisfying.

And indeed there are those times when he’ll beg me not to let him come. If you consider that flavour of male chastity punishment, then it’s entirely self-inflicted.

I read before we actually got into the lifestyle ourselves that men often feel a sense of let-down and disappointment once you allow him to orgasm.

It seems they desire release, but crave denial. I didn’t believe it then… but I know it’s true now.

But I think it’s actually even more subtle than this. I think it’s often not even a case of whether you allow him to orgasm or not… it’s more that he wants YOU to decide.

It's a kind of power exchange.

If he desires release and craves orgasm… then he needs control.

But just in case you think that gives us ladies the upper hand… you’ll find we come to crave it and need it as much as our men do.

So really, I guess it all comes back to being less one-sided than you might think. Each side is getting what he wants from the other, even though each almost certainly secretly believes he is getting the best part of the deal.

And that, to me, makes it a perfect arrangement for all.

Back to top of Male chastity punishment: genuine, lies, or something else?

Back to Dominance and Submission
Previous
Next