The ruined orgasm I gave John on Saturday evening has to be the best (or worst, depending END_OF_DOCUMENT_TOKEN_TO_BE_REPLACED

Forced male chastity... a bit of a hot topic, and, ultimately, one large pile of unicorn shit, END_OF_DOCUMENT_TOKEN_TO_BE_REPLACED

FLR and male chastity are common bedfellows, but it's incorrect to say each is necessary for the other, or, indeed, submission and surrender to your wife's will is an inevitable consequence of giving her the keys to your chastity device.

FLR and chastity... how we got here

The place for me to begin has to be with an admission, if not actually a confession: not only is a female led relationship not what we had planned, but I was even resistant to the whole idea, even though I knew intellectually it wouldn't require John to turn into some kind of submissive and cowed weakling.

I'll be frank here: I find the men who want to be humiliated and abused to be quite unappealing and unattractive; in the extreme, I find them even repellent.

There is nothing attractive to me about a man who with low-self esteem and who considers himself to be a worm, second-class citizen, or object of derision.

All of this is their choice, of course, and as a libertarian I'd be the first to say it's none of my business how they choose to conduct themselves in their own relationships.

But what is my business is how I feel about someone who wanted me to treat him in that way. It would be a monumental turn-off.

Nor do I want a man who's weak, unable to think for himself and form and express his own opinions, or unwilling or unable to speak openly and honestly to me regardless of the consequences because he wants to spare my feelings or somehow "protect" me

What we do we do of love, mutual respect, and the pleasure of giving someone else pleasure.

Humiliation speaks to contempt, and I think contempt is the antithesis of love.

Fortunately, John can't be humiliated, intimidated, or bullied, and has no desire to be treated in a way intended to elicit those feelings.

To be humiliated one first has to care what others' opinions about them are.

John's view is others' opinions are none of his business, let alone any of his concern, so it would be literally impossible to humiliate or embarrass him. If anyone tried, he'd just laugh in their face.

And to be intimidated and bullied, one has to fear one's aggressor.

John's an easygoing fellow, but he's as wide as he is tall, well able to take care of himself, and has a vicious side you would't want to have blow up in your face (not, I hasten to add, he's ever turned that on me — he's always treated me like his Queen. Suffice it to say I fear nothing and no one when I'm with him).

There are reasons John is indifferent and immune to these things, and the underlying causes mean he's eminently well suited to the discipline, structure, and routine of a female led relationship and flr chastity, but I'll leave that discussion for another day.

The structure of a flr, chastity, and submission

When it became clear things were moving in the direction of a female led relationship we sat down and talked it over at length, and then went away to think about it all for a long time, occasionally coming back to it as our ideas took shape.

Over a period of two or three months a framework for how we saw a flr panning out for us grew naturally from our thinking.

It was clear to both of us John had, over time, enjoyed the structure and discipline male chastity gave us. Moreover, it also became apparent we both enjoyed the times I took more of a lead role both in and outside of the bedroom.

It naturally evolved to where I'd sometimes send him up to our bedroom to wait for me on his Place, kneeling naked and patiently waiting for me to come up and summon him to bed. I'd also do it when we went away and stayed in hotels and the like. 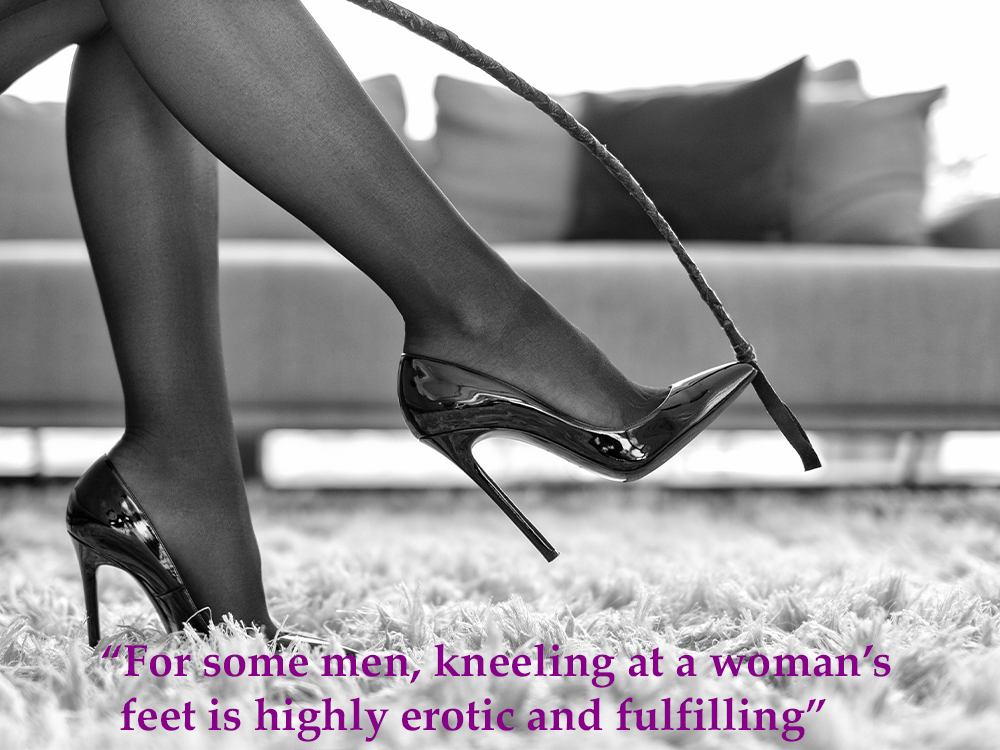 As time went on we thought and talked more and more about it all, and finally decided it was perhaps time to make it more "formal".

We'd both seen those "slave contracts" you get floating around the Internet, and for the most part found them to be childish. Most of them are written in almost archaic and flowery language and seek to proscribe, prescribe, and micro-manage every aspect of the man's behaviour.

Every single one we saw was unrealistic and unworkable, and I suspect existed only to provide wank-fodder for the wider submissive community.

We weren't interested in complicated and frankly idiotic "contracts" where men are referred to as little more than beasts, and there's some asshat notion of women being inherently superior to men.

What we wanted instead was to keep things simple, practical, and flexible, yet lose none of the power inherent in his submission.

Eventually we came up with three core ideas, all of them involving mutual acceptance and consent.

In essence, in return for my acting out the leadership role he'd submit himself to my authority and rules. Mutual quid pro quo.

I'll cover each of these and how they work for us in much more detail in subsequent posts, but it's worth expanding upon them a little right now.

Acceptance of and submission to my authority

We agreed I'd be the one to make the decisions in our marriage.

I'd consult him on important matters and take his advice where he was qualified to give it, but ultimately I'd be the one making decisions.

This also included sex and chastity, too. At the moment, John gets to come once or twice a year at most. That suits us both well.

This obviously didn't extent to the business side of things where I'm simply not qualified to have an opinion, let alone make a decision.

Obedience to my will

He agreed to obey me, immediately and unconditionally so long as my commands were legal, moral, ethical, and not injurious or harmful to him or another, and didn't compromise his business, character, reputation, or integrity.

Adherence to the discipline and rules I set out for him

His submission to my authority and oath of obedience then allowed me to develop a framework for us to live in a FLR, chastity being just one part of that.

I'll say more later, but one thing I will say (because so many people will want to know, and I'm in an indulgent mood), yes, the regime I have John living under does involve punishment if he disobeys or displeases me.

How do I punish him?

It depends, but the two main ways are kneeling in restraints (sometimes all night in the bedroom while I sleep), and, if he's been particularly irksome, a hard caning on the bench we have (although he's now been tasked with designing and building a new one, one where I can keep him even more immobile and heighten his sense of powerlessness).

I don't enjoy punishing him. I'm not sadist and it gives me no pleasure to know he's uncomfortable kneeling there in the dark, or his arse is stinging as I stripe it.

But that doesn't mean I go easy on him.

The nights are long, and the canings hard.

And both utterly merciless.

It's what we agreed to, and I'm keeping up my half of the bargain.

Finally, I want to stress this...

None of this is or can be "forced".

A common fantasy with men is there exists a genuine scenario when men are forced to submit to them against their will.

Attractive and exciting as it may seem, it really is just a fantasy. For reasons I've explained elsewhere, forced chastity (or any kind of forced flr chastity or male submission) is simply bullshit.

I have absolutely NO power to force this or anything else on John beyond his own integrity to the oath of obedience he gave me.

All John has to do is say it, and we stop.

But it means we stop completely and we stop permanently.

As I've said before, the only power a woman has in a flr, chastity play, or any other form of submissive male relationship is the power to refuse to play the game any more.

John agreed to these terms with full disclosure and acknowledges the power of them to keep him obedient to my will.

And so far, it's worked flawlessly.

Back to top of FLR chastity: love, marriage, and surrender