posted in Sexuality and Relationships

The ruined orgasm I gave John on Saturday evening has to be the best (or worst, depending END_OF_DOCUMENT_TOKEN_TO_BE_REPLACED

Forced male chastity... a bit of a hot topic, and, ultimately, one large pile of unicorn shit, END_OF_DOCUMENT_TOKEN_TO_BE_REPLACED

Male chastity and marriage are perfect complements. That's the conclusion I've come to after more than a dozen years in the mostly-strict lifestyle with John.

It's seems scarcely possible it's been so long.

It seems even less possible I've started this blog more than 10 years ago. The very first post I ever wrote is here, but as you may notice if you've been here before, much of the stuff I've written over the years is missing.

Exactly why that is I'll come to anon, but...

... I've not posted here at all for five or six years.

Now, that's a long story, and one I'm not going to be able to share with you in a single post.

Here's a brief synopsis. I'll deal with it all in detail over the next few weeks and months. I have a lot to share.

That's a very high-level view of what's gone on.

But the questions you're probably asking right now, assuming you care enough to ask anything at all, are why now? and what's changed?

Let's take them in order.

A couple of reasons, I guess.

The first is it feels right.

Things have changed over the years with the usual ebb and flow of life and the mood to pick up the blog again was never quite "there", you know?

At the same time real life was treating us to a roller-coaster ride, our dynamic of male chastity in marriage was changing and going off in directions I hadn't expected or even dreamed of. Things just took on a life of their own and no one was more surprised than we were where it ended up a year or so ago.

And the second is that which we're all sick and tired of hearing about: COVID bloody 19.

Neither this lockdown nor the first caused much change in the day to day of our lives because we both work from home (and it's been beyond great for John's business). But I have found even my sparse social life and ability to travel somewhat curtailed, so I have an awful lot of time on my hands and wanted something to do.

I invested some time in writing a series of stories of the obvious kind (coming soon, unlike John), but then decided the time was right to pick up the Male Chastity Blog again.

And here I am.

What we found was the power-dynamic between us changed over time.

Fundamentally, male chastity in a marriage is a form of power exchange. The fantasists see it as very black and white, but, like all of life, it's shades of grey. 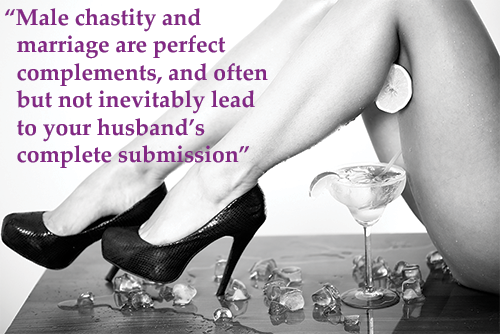 And what we found over time was we were increasingly living in a female-led relationship.

It wasn't something we decided.

More to the point, we weren't generally aware of things changing except in hindsight.

We had no plan and no conscious direction, but we did have a direction and it slowly became clear which way we were headed.

For me and John, a male chastity marriage has been the best decision we ever made bar getting married itself.

And what came as a complete surprise was how we somehow came to embrace and then practice first a female-led relationship, and then, ultimately full male submission, where John made an oath of obedience to me and accepted my authority in all areas of our lives together.

Until he knelt at my feet and made his oath, there was no Big Moment, no grand realisation of what it all meant. It came as a surprise to us both.

I'll say more about this as we go on.

For now, and to forestall any of the inevitable comments I expect from fantasists, I'll just say it's as sane and level-headed as you'd expect from me, and doesn't involve humiliation, cuckolding, or John being "forced" to do anything.

As with all things kink, it's consensual.

Sorry to disappoint you an' all.

OK, enough of that digression.

Back to the topic at hand...

Is male chastity good for a marriage?

One of the big myths is male chastity in a marriage is some kind of panacea for mending a broken relationship.

Because while it will generally lead to more sexual activity and physical and emotional intimacy, that's predicated on the marriage being solid in the first place.

If your wife isn't interested in having sex with you and you imagine introducing the kink of tease and denial is going turn her into a rampant sex-kitten, I guarantee you're rapidly filling a big keg of powder, and eventually it's going to blow up in the most spectacular fashion.

Because while you're telling her about what you think is a hot fantasy, it's almost certain she'll see it as a great excuse not to have sex with you at all, ever, which is the opposite of what you actually want.

Very few women are even aware of male chastity, let alone think of it as a fun thing to add to our marriages (it's vanishingly rare for a woman to raise the desire for male chastity in a marriage, and every account I've seen of it happening stinks of bullshit).

For most of us, we don't understand the benefits until we experience them, and that means having the will and desire to play the game.

I can't emphasise this enough: male chastity in marriage is not a panacea.

Anyway, that's me done for now.

Back to top of Male chastity and marriage: some shameless secrets you’ll love

Back to Sexuality and Relationships
Previous
Next