The ruined orgasm I gave John on Saturday evening has to be the best (or worst, depending END_OF_DOCUMENT_TOKEN_TO_BE_REPLACED

Forced male chastity... a bit of a hot topic, and, ultimately, one large pile of unicorn shit, END_OF_DOCUMENT_TOKEN_TO_BE_REPLACED

There was a second reason for documenting our experiences in the male chastity lifestyle by writing the Blog, of course, and in my hurry to finish the last post before taking a trip to the airport I forgot to put it in.

And this was to share our experiences of long-term chastity just for the fun of sharing them, if that makes sense. It’s been quite a journey at times, and to my surprise (though on reflection I ought to be surprised at being surprised), it’s also attracting sensible and thought-provoking comments from readers).

So far we got as far as the CB3000, that most disappointing plastic thing which pinched, rubbed, squashed and did everything it was supposed to do except stop John from orgasming.

So we soon ordered what we thought would be a good replacement: something called a “Stallion”. We’ve still got it somewhere so I can take some pictures and put them up here on the male chastity blog if anyone’s interested.

No, John won’t be wearing it!

Anyway, the Stallion was a big mistake for long-term chastity

First, the testicle ring was far too big; and secondly, the cage itself was large, heavy and completely unsuited for anything but chastity play.

We could have paid £54 for a new ring, but it was SO unsuitable for what we wanted at that time – more chastity lifestyle than chastity play – we didn’t bother. 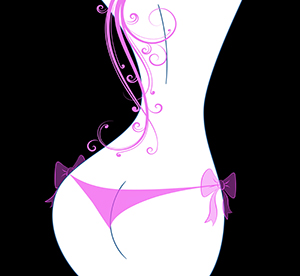 Most men enjoy being teased...

Time for a digression: what we didn’t realise at first is there’s a big difference between chastity play and the male chastity lifestyle. I think most men enjoy being teased to some degree by a woman, and if you think about it that’s nothing more than vey mild chastity play, or at least “denial” play.

I realise long-term chastity and denial aren’t the same thing but on the male chastity blog I use them pretty much interchangeably (but in our chastity contract, we’ve been very clear about what all the terms mean just so he knows what to expect and can’t weasel out of anything).

Back to my original digression after digressing a second time… most men who are interested in the male chastity lifestyle fantasise about long-term chastity, but tend to start off with a bit of experimentation in the form of gentle chastity play (it’s obvious why, if you think about it: they need to lead their often shocked partners into it slowly).

And this is exactly how it was with John and me…

Which has ultimately led to our going much more deeply into male chastity lifestyle and now to my writing the male chastity blog. Funny how all this works out, isn’t it?

We did find the CB3000 and the Stallion were OK for chastity play (and I know some people have found the CB3000 and its successor the CB6000 to be perfectly suitable for long term and even permanent chastity).

I’d be somewhat staggered if anyone found the same for the Stallion, though.

So we’d reached something of a dead end. We did a lot of research (and I mean a lot) and for various reasons we decided we either had to go for a Lori or a full belt.

In the end we went for a Lori #12 D, which first meant John getting a sharp needle shoved through his penis…

Back to top of Male chastity lifestyle: payback for writing the new blog

Back to Male Chastity Lifestyle
Previous
Next